The Melbourne School of Literature is proud to present the Evening School for Semester 2, 2022. Our course is 24 hours in length.  All courses will be taught via Zoom.  If you have any questions which aren't in our FAQs please email This email address is being protected from spambots. You need JavaScript enabled to view it.

ONLINE.  The course will be taught via Zoom. 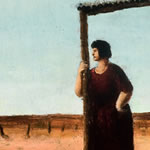 In 1788, the arrival of European colonisers in Australia coincided with the emergence of modern ideas of citizenship, stemming from Enlightenment debates about what it means to owe allegiance to a particular sovereign or a certain territory. This course seeks to examine how nationalism has shaped settler Australian literature, how the adjective in ‘Australian literature’ signifies less a geographical location than an ideology of national identity. To bring these themes into focus, we will examine the liminal, oft-maligned figure of the international ‘writer-visitor’, to see how they are simultaneously inculcated in, and excluded from, the national canon. The twelve lectures draw on an eclectic selection of Australian poems, novels, short stories and stage-plays by international authors of significance—provided in the course’s Dropbox—to give both a history of their individual visits and a discussion of the broader aesthetic consequences of their writing.

WK 1: National Anthology vs. Acanthology: This introductory lecture begins with a history of ‘Australian literature’ as a national literary category. We will discuss the various cultural interfaces and literary technologies that are essential in the construction of a national canon, with a focus on the national anthology (from the Greek: anthos ‘flower’ and logia ‘collection’), which came to prominence in the nineteenth century, alongside such national institutions as the British Museum and the Royal Academy of Arts, as a means of presenting and reproducing national identity. I will propose the ‘acanthology’ (from acantha, meaning ‘weed’ or ‘thorn’) as a way of thinking about the relationship between writer-visitors and the anthos of the national canon.

WK 2: Parataxis as a reading practice: A curious feature of settler Australian literature is that its founding poet, Barron Field, was not a settler but a visitor. This lecture aims to understand Field’s poetry in a wide historical arc, reading his First Fruits of Australian Verse (1823) against Courrier des Antipodes (1978) by the French author Michel Butor. We will discuss how parataxis (literally: a placing of two things ‘side by side’) is a structural device used to present the selected corpus that makes up an anthology. Drawing on Susan Stanford Friedman’s discussion of parataxis or collage as a scholarly reading methodology, I will describe how parataxis will inform our own reading of the writer-visitor acanthology.

WK 3: Cook, Conrad and the Poetics of Error: This lecture examines the ‘complex intent’ behind Joseph Conrad’s 1888 re-enactment of Captain James Cook’s 1770 journey up the east coast of Australia to the Torres Strait. In his later autobiographical essay, ‘Geography and Some Explorers,’ chief among the errors in Conrad’s account of this journey is his curious elision of Cook’s act of claiming possession for the British crown on Bedanug, or Possession Island: an omission that served psychologically to distance the explorer from the violence of imperial history. This allows Conrad to maintain his nostalgic desire for a form of what Paul Carter has called ‘spatial history’; what Marlow in Heart of Darkness (1899) would, with evident irony, call ‘the glories of exploration’.

WK 4: Theories of Australia: In this lecture, we pause our examination of the writer-visitor acanthology to contextualise our thinking within contemporary debates about settler Australian poetics. Essays by Michael Farrell, Justin Clemens, Martin Harrison and Sneja Gunew will be discussed.

WK 5: Kangaroo and Australian Modernism: 2022 is the centenary of the Australian visit of British novelist and poet D.H. Lawrence, during which he wrote the novel Kangaroo (1923). Kangaroo is perhaps the most famous and influential writer-visitor text written about Australia, providing an opportunity to track settler Australian responses to the figure of the visitor. I will argue that Kangaroo at once chaffs and shapes twentieth century Australian literature, establishing the aesthetic terms for settler Australian modernism, a category from which his own contribution was necessarily excluded.

WK 6: Missed Australian Modernisms: This week we examine two texts published in close proximity to Lawrence’s 1923 novel Kangaroo: the novella 1922 Kanga Creek, the only published work of fiction by the British sexologist Havelock Ellis, and the Polish experimental stage-play Metafizyka Dwugłowego Cielęcia by Stanislaw Witkiewicz (aka Witkacy). Drawing on the themes of last week’s lecture, we ask: what Australian modernism might have developed if Ellis or Witkacy had provided their basis?

WK 7: Is UnAustralian Art History Any Use to Artists?: This week we discuss approaches to nationalism and postnationalism in Australian art history, with a particular focus on the productive model provided by Rex Butler and A.D.S. Donaldson’s ‘UnAustralian art’ project. A ‘parallel’ history to a nation-forming canon, Butler and Donaldson pay close attention to artists who have previously been considered too foreign, too cosmopolitan, or too marginal to be understood as great Australian artists. Instead of accepting the airtight lock previous art histories fashion around the national canon, Butler and Donaldson trace the trajectory of Australian artists who have ‘come’ and ‘gone’ through the imperfect seal of nationhood, hunting the cracks and theorizing the leaks.

WK 8: Essential Gossip, U.S.-Australian poetics and the Generation of ’68: Today it is an accepted literary-historical truism that emerging Australian poets in the late 1960s and 1970s turned en masse to post-war American poetry for inspiration. In this lecture, I will show how such influence was established through improvised interpersonal networks and fledgling institutions, focusing on the visits of three key post-war American poets: Allen Ginsberg, Robert Duncan and Denise Levertov.

WK 9: Australian Marginalia: Over the next two weeks, we are going to look at authors who visited but who claimed never to write about Australia. We begin with Raymond Roussel, who wrote in his descriptive ars poetica ‘How I Wrote Certain of My Books’: ‘I travelled around the world by way of India, Australia, New Zealand, the Pacific archipelagos, China, Japan and America. Now from all these travels I never took anything for my books. It seems worth mentioning because it shows how much my imagination accounts for everything in my work.’ This claim will be contested by examining the many references to Australia in the margins of his most famous works. Likewise, John Ashbery stopped mentioning Australia in his poetry after visiting in 1981. Yet his time here will provide necessary context for our examination of a minor tradition of New York School writers imagining Australia.

WK 10: ‘C’est l’Australie qui m’a foutu mal!’: In this second week on writer-visitors not writing about Australia, we will discuss Georges Perec’s unfinished and posthumously published novel 53 Jours (1989), written during his brief visit to Australia in 1981, and his conceptual approach to writer-visitation.

WK 11: ‘The Countries of Others’:  In our penultimate class, we will be joined by Louis Klee for a guest lecture on Australian poets migrating outside Australia; Les Murray, Peter Porter, the ‘Boeotian’ and ‘Athenian’ strains of Australian writing; the contemporary lexicon of living away; Oodgeroo Noonuccal’s British Airways ‘sick bag’ poems.

WK 12: No Entry, No Exit: ‘Until recently’, writes the poet-critic Philip Mead, ‘“Australian literature” has been an imagined entity that belonged predominantly to the discourse of national culture and its institutions.’ As he suggests, Australian literature has been transformed in the wake of globalization, leading to a more complex, less coherent, less nationally motivated writing culture. In this lecture, we ask what the contemporary transnationalism of Australian literature means for the figure of the writer-visitor, by examining the works of two recent authors, Yang Lian, who (in the wake of the Tiananmen massacre) was unable to return to China, and Behrouz Boochani, who was prevented from arriving, subject to the cruel excesses of Australia’s border policy.