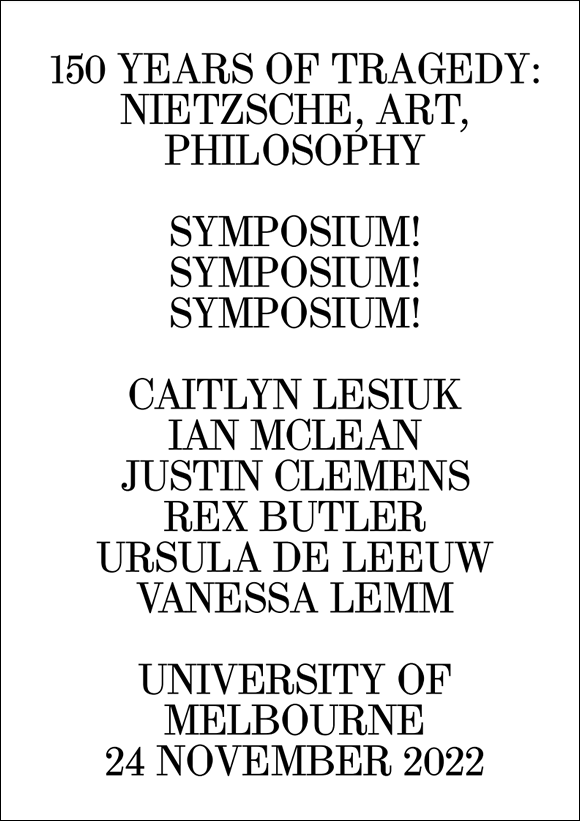 150 years after the publication of Nietzsche’s first book The Birth of Tragedy from the Spirit of Music, the provocative philosopher’s work continues to fulfil his own prediction that he would only be born posthumously “with a voice that spans millennia.” Tracing the development of art and culture back to a conflictual drama-turgy between the two primal forces of Apollo and Dionysus, Nietzsche’s debut work celebrated the Greek classicists and modern romantics alike for having the strength to affirm and even delight in their aesthetic depictions of the immense suffering that nature and the gods invariably wreak upon humankind.

Nietzsche’s impact on both art and philosophy has been nothing short of seismic, from Norman Lindsay’s The Antichrist of Nietzsche, to Sigmund Freud’s psychoanalysis, to Aby Warburg’s iconography, to Paul Taylor’s Art & Text.

This symposium, convened by Paris Lettau and Vincent Le with INDEX-JOURNAL, presents papers from a broad range of scholars newly examining Nietzsche’s own writing and his later influence at the intersection of art and philosophy, both ancient and modern, in Australia and abroad.

THE FORCED CHOICE OF PHILOSOPHY: On Alenka Zupančič’s The Shortest Shadow
Rex Butler

24 Nov Symposium: The Birth of Tragedy